Tale of a Guardian's Tail 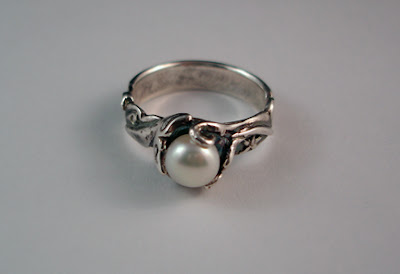 Guardian's Tale - freshwater pearl, waves, a small starfish, and of course a whale's tail. 2011.
Last year I made a ring with a whale tail for a friend while her family was going through some tough times. To her the tail is a symbol of strength and faith as it reminds her of the Bible story of Jonah in the whale's belly. My friend is an "everyone's Mom" kind of gal - brings people together with potlucks at work, stops to help at car accident scenes on her day off, and would give the shirt off her back to someone in need. Or in this case a ring. 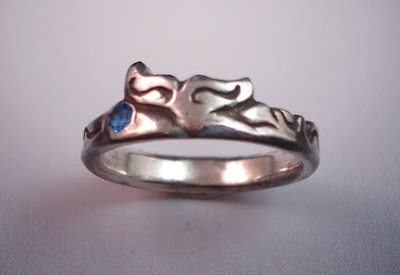 Original carved whale tail ring with blue CZ, 2010
The decorative seat for the pearl came about as we both liked the idea of the tail wrapping around the pearl and she happened to see a mabe pearl ring with an ornate floral bezel style setting in an Avon catalog. (Unfortunately neither of us can find the original picture!) 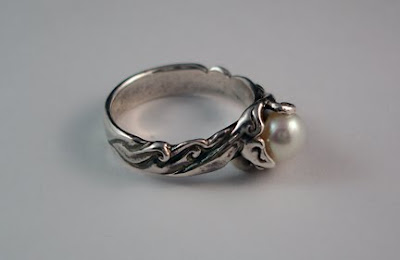 A flat ring band made the base, a small circle for the the pearl wire to attach to was added, then the design sketched onto the band. I cut out small whale tail shapes in card stock until I had one that wrapped around the pearl seat nicely. An escapement file was used to carve waves in the back ground, while coils of clay were added to make swirls and waves. 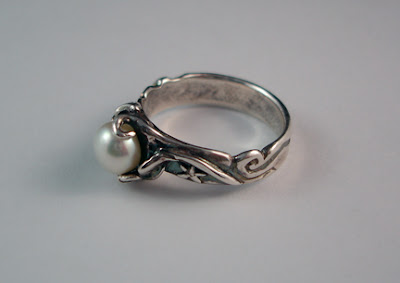 Everything including a nice blue patina came together well! I love the dimension and depth from the combination of carving and addition of clay brings. Definitely my kind of thing and something to keep playing with.

Posted by Michelle Loon at 7:54 PM 4 comments: Links to this post

Michelle Loon
from Placentia to Oceanside, California, United States
A metal clay artist and instructor based in Southern California, I love the challenge of reverse engineering imaginative, playful forms into pieces of sculpted wear. When not immersed in clay, I enjoy exploring acrobatic aerial arts. Website: www.laloondesigns.com